The first time I watched Eternal Sunshine of the Spotless Mind, years ago, I didn’t like it.

The film, about two people who go through a procedure to erase each other from their memories, was made well, and I appreciated the vision of Michel Gondry. I also loved Jim Carrey’s more dramatic, tortured side à la The Truman Show. But the story scraped against me as I sifted through my own memories of guys that were never right for me, and relationships I had believed were more than what they actually were.

I watched Eternal Sunshine again this weekend. And I liked it this time.

I’ve said that the viewing experience of Sophia Coppola’s Lost in Translation is malleable—the film elicits different emotions each time I watch it, and my relationship with it evolves as time passes. I feel this way, too, about Eternal Sunshine: I like it or hate it depending on where my head is. And where my heart is.

Even though Joel and Clementine use the services of Lacuna, Inc. to erase their relationship from their memories, they cross paths again—on a train from Montauk—and discover their identities soon after. I liked the movie because, despite how you interpret the ending, it’s ultimately all okay. Not in that they’ll get back together and it’ll work out this time and all is peachy okay, but rather in that she’s hurt and he’s hurt and life can be painful and hard but it’s still okay kind of way.

And I liked that—despite the harsh memories of the couple’s fighting, the awkward conversation about not being ready to have a baby, their silence while eating in a restaurant, the flaws, and the pointing out of these flaws—Joel brushes them aside, or rather, accepts them, in order to keep the happy ones.

Please, not this one. Don’t take THIS memory, he thinks as he lies in bed as the erasing technician zaps his brain of vestiges of Clementine: The good remnants. The beautiful ones. The early moments, the moments of discovery and curiosity, the moments under the covers, the moments lying on ice while gazing at the night sky.

Failed relationships aren’t all bad, are they?

Memories of a relationship, good and bad. I’m reminded of “Chat History,” a sad, personal piece on GOOD about a woman who recounts her relationship with her partner Clark, who died of cancer, via old chats and emails stored in her Gmail account. She dives into a vault of memories not really intended to be archived—but they are—just as Joel is forced to face all his memories of Clementine:

I go looking for evidence of our partnership that’s not tied to a memory of me sleeping on two chairs pushed together next to his hospital bedside . . . I type his name into the search field and enter a world of the unscripted dialogue that filled our 9-to-5 existence . . . This is a history of our relationship that we didn’t intend to write, one that runs parallel to the one authored by his uncontainable illness.

In early 2010, I searched for my ex-boyfriend’s first and last name in my Gmail search bar and deleted, all at once, our email exchanges and chat conversations over a period of three years. Consciously erasing a relationship. Curating my own history.

But that action of pulling up that history and trashing those messages seems insufficient, doesn’t it? Memories aren’t just digital files. And even if a relationship has ended sourly, would you want to erase it completely?

So, Facebook Timeline rolls out this week. A bit on Timeline from Facebook’s intro page:

Last night, I sifted through my entire Facebook history and deleted comments, hid status updates, and untagged or removed unflattering photos I’d forgotten about. I didn’t delete much, as prior to 2011, I wasn’t that active on Facebook: I’d deactivated my account numerous times and was nearly nonexistent from 2007 to the first half of 2010. Still, I combed my Facebook wall like I was meticulously proofreading a job at work. Why? Not because any of the content was inappropriate, or meant to be a secret, but because I micromanage myself. Because I’m a perfectionist.

And because sometimes I just want to erase: to forget in the same way I had wanted to forget everything associated with a past relationship and a hard, confusing breakup.

But my curation of my own history—the deleting of previous status updates, the “featuring” of particular posts—is strange. More so than before, I am able to highlight what is important in my life—or what I want others to view as important—and fill in missing details from today to when I was born: 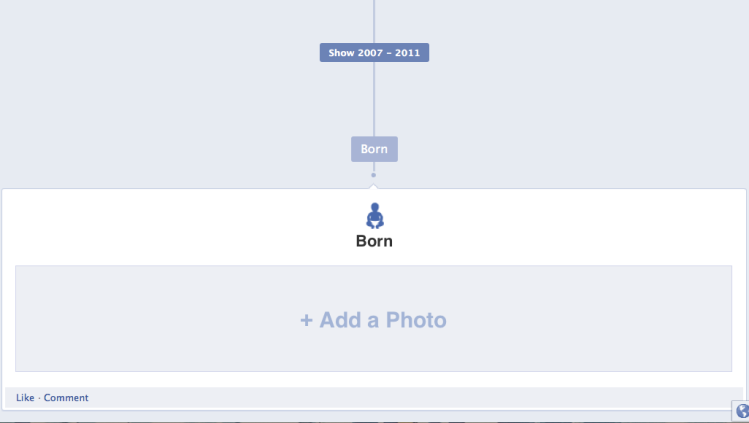 And no, there is nothing new about telling my life story exactly the way I want. But with the memory erasing procedure in Eternal Sunshine fresh in my mind, I find Timeline—and my general ability to click “Delete”—fascinating. And at the same time, rather scary.

“Once you get timeline, you’ll have 7 days before anyone else can see it. This gives you a chance to get your timeline looking the way you want before other people see it.” Right here, in Timeline’s instructions, I’m encouraged to pluck out my flaws and dismiss memories that aren’t life-altering or amazing.

And yet Timeline isn’t all about pruning and perfecting—we can note the end of a relationship, for instance, if we want to:

I can see how some people will find inputting missing details of their lives to be fun. But I sense a forced organization of things that can’t—or shouldn’t—be compartmentalized. And further digitization of my memories.

I don’t know. After watching Eternal Sunshine again, and feeling good about it this time around, I kinda want to let my memories just be.

Senior editor and story wrangler, WordPress.com and Longreads. Not to be fed after midnight. View more posts

158 thoughts on “On Eternal Sunshine, Erasing Memories, and Facebook Timeline”