Bermuda is about 20 square miles, and made up of over 100 islands. In the middle of the North Atlantic Ocean and surrounded by treacherous reefs, it’s a place rich with stories.

Bermuda’s history is fascinating, and every person we met and chatted with — taxi drivers, waiters, residents — was so knowledgeable and proud of this history. They are all storytellers, telling tales of seafaring and discovery, from the first Spanish explorer who reached Bermuda’s shores in the early 1500s — and ultimately did not settle because he feared it was an island of devils — to the 1609 shipwreck of the Sea Venture, a British ship on its way to Jamestown, Virginia, that separated from its fleet during a hurricane.

Being my first visit to Bermuda — a British Overseas Territory — I wasn’t sure what to expect. After exploring by bus for the first few days, I realized it didn’t feel or look like the islands I’ve visited further south, in the Caribbean. Its street signs, red pillar post boxes and telephone booths, and parish names — like Southampton and Devonshire — are certainly British, while much of the island is generally well-kept, like a big tropical golf course.

Bermudians are incredibly friendly, courteous, and helpful. Here, you greet everyone, from people walking down the street to other passengers sitting on the bus. (Don’t even think about getting on the bus without saying “good afternoon” to the driver.) It’s a pleasant place to be — and quite different from what I’m used to.

Bermuda’s architecture is simple and uniform, which you spot immediately when landing at the airport. All the houses on the island are painted a unique pastel shade and have white tiered rooftops, which collect rainwater into storage tanks. One taxi driver mentioned that no two houses in a neighborhood are painted the same color, unless they’re owned by the same family.

At the end of March, just before Easter and cruise season begins, Bermuda is mellow and quiet.

Many of its beaches are deserted, the roads are clear, and the harbors are empty. It’s nice to experience the island without crowds — to be able to wander long stretches of pale pink sand in solitude.

We stayed in a cottage in Southampton, on the south shore of the island, at the Reefs hotel. Nick and I don’t usually stay in posh resorts like this, but it was a special occasion — a spring holiday with mum — and we were able to book at a discounted rate. 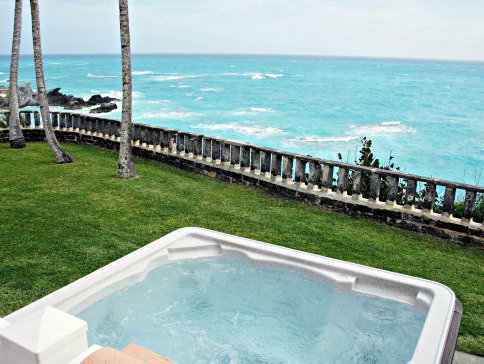 Our hot tub overlooking the Atlantic, on the south shore of the island.

The back patio entrance to our cottage in Southampton. 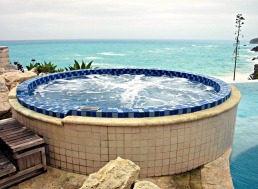 Looking to the cliffs of the Reefs resort from the rocks below. 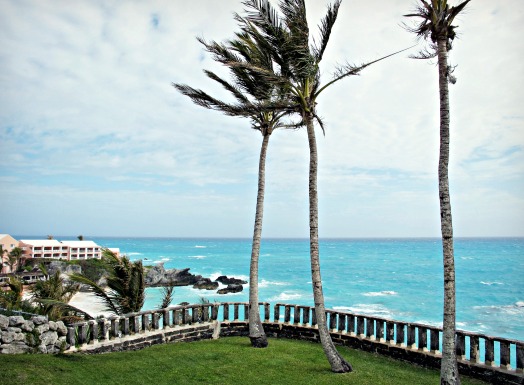 Backyard view of the sea in Southampton.

It was windy for most of the week and stormed a few nights — authentically Dark ‘n Stormy, I suppose — but we had a lovely time getting acquainted with Bermuda, in awe of its turquoise waters and the reefs and rocky coves that make up its beaches.

43 thoughts on “A Week in Bermuda”